Rise to the sky, discover exotic butterflies and the beauties of Machu Picchu: All that in one stay in Olomouc

Olomouc is sometimes called the metropolis of Hanakia and many (mistakenly) believe it to be the birthplace of the famous stinky Olomoucké Tvarůžky cheese. Yet most importantly, Olomouc is a city that is not only full of history, but also quite cosmopolitan. Just like Berlin, it is home to a plethora of (alternative) bistros, its Flora Centre, which hosts famous flower exhibitions every year, gives it a distinctly Amsterdam-like vibe, and if you squint a bit in the summer, you might even feel almost like you’re on vacation at the seaside – especially if you get lost in the historical centre’s winding alleys.

Even if you’re not avid history fans, your trip to Olomouc will never be void of historical sights. You’ll literally encounter them at every corner. Your “tour de Olomouc” can start right in the centre, with its two connected squares. The Upper Square, logically situated at the lower end of the plaza, has several important monuments in itself: not only the City Hall, but also the Astronomical Clock, which is still functional and the only one in the world decorated in the social realism style. Above the Upper Square, you will, unsurprisingly, find the Lower Square. Next to the City Hall, you can also admire the UNESCO listed baroque Holy Trinity Column – in September and October 2020, it will be 20 years since it has been put on the World Heritage List.

When roaming around the square(s), don’t miss the fountains – not only the historical, baroque ones (there’s six of those in the city), but also the modern one, which became the most popular meeting spot for the locals: almost everybody in Olomouc knows what “let’s meet by the turtle” means. The Arion Fountain was installed at the Upper Square in 2002 and it has divided the locals into two embattled camps: they either love it or hate it. It’s up to you to judge how well the turtle and cheerful dolphins fit in with the remaining baroque fountains.

The churches of Olomouc are also definitely worth a visit. At St. Maurice you can see  the biggest organ in Central Europe and at the so-called Dome, the St. Wenceslas Cathedral, you can see basically everything. Literally. In the Dome, you can buy a ticket to the southern tower, to get a bird’s view of the metropolis and its surroundings. Be warned: climbing up is not for the faint of heart (or body). The tower is almost a hundred meters tall and everybody who decides to climb up has to brave its 448 or 564 steps. On the way, all the brave climbing souls can also admire the St. Wenceslas Bell, which weighs seven and a half tonnes. Up to the bell, it’s fairly easy going on a comfortable staircase, but don’t take that as a sign of things to come. The stable stairs will soon be replaced by a metal spiral staircase, which will definitely not be a favourite for anybody with a fear of heights. The truth is that even the fearless can expect at least some goose bumps once they’re done climbing: the tower’s gallery is only 50 cm wide, meaning even the bravest visitors usually stick pretty close to the tower walls. Nevertheless, the climb offers an experience that you should definitely not miss. Guided tours are organized by the Durancia Association, amongst others, and they also offer tours through the Olomouc underground.

A (sub)urban touch of nature

This summer doesn’t look promising when it comes to exotic travels, but you can get your dose of the exotic in Czechia (or Hanakia), specifically in the Moytýlárium, home to a unique exhibition of tropical butterflies. Visitors can walk amongst the flapping butterflies or look at chrysalises that will turn into butterflies one day – the goal is to give tourists an idea of the transformation from a caterpillar into a butterfly.

And if you miss travelling into faraway lands, you can always set off for Machu Picchu. You won’t have to go all the way to Peru; you just need to head to the village of Paseky, about 30 km away from Olomouc. There, at the foothills of the Nízký Jeseník hill, you can find the unique Machu Picchu Arboretum. It resembles a huge rock garden, closer to distant landscapes than the Jeseníky mountains. The exotic feel is compounded by the colourful slope and a plenty of walls and tiny viewpoint houses scattered across the arboretum.

Olomouc is full of life, partly because it’s a university town. It’s filled with excellent food places and spots where you can have a good time. The Olomouc open-air cinema is definitely worth a mention, if only for its incredible atmosphere. It’s located right next to the ramparts in the former bastion. Alongside a number of juicy summer flicks, the cinema also offers an excellent grill bar. Nearby, you will find the Long Story Short Hostel, which won several international design awards, and its excellent  Eatery&Bakery restaurant. Last year, it was listed as one of the world’s top ten hostels by The Guardian. If you crave peace and relaxation, you can also sit by the pond in the Olomouc Kaprodrom, a restaurant that lets you fish for carp and lends you all the gear you might need.

You can also have your fun right in the historical centre, in the Konvikt Bistro & Bar. The former Jesuit monastery has been turned into a student art centre of the Palacký University. In August, you can visit the traditional Olomouc Shakespeare Summer Festival (9 – 19 August 2020), organized by the alternative Tramtárie Theatre. Forget classical Shakespearean plays, though; their biggest hit is a Czech play called the Naked Shakespeare Cabaret...

Olomouc is also inseparably tied to the Olomoucké Tvarůžky cheese, even though it’s not produced directly in Olomouc, but in the nearby Loštice. In any case, make time for the local cheese specialty. Ideally, make a trip to Loštice and explore their cheese shop, a restaurant specialized on Tvarůžky, and even a Tvarůžky sweets shop. Their ice cream offer includes a Olomoucké Tvarůžky cheese flavour. You can also visit the museum of Tvarůžky.

It seems that August might be quite sunny and hot, meaning a refreshing dip in a lake or a pool might come in handy. Not far from Olomouc, you can try the Poděbrady natural swimming pool (including a fairly popular nudist beach :-)), nicknamed Geby by the locals. You can go there to swim or just to sit by the water and enjoy the local restaurant with its excellent grilled mackerel or one of the regular concerts and cultural events. If you prefer a bit more privacy, you can head towards Nová Ves and a refreshing flooded quarry.

Simply put, if you decide to head to the Olomouc region, expect you’ll need at least a long weekend. The Svatý Kopeček Hill offers both the Minor Basilica of the Virgin Mary and a beautiful woodland Zoo, Hrubá Voda has a sports park with a bobsleigh track and wellness, and up to the end of September you can get lost in the Slavonín corn maze. If you spend more than two nights in the city (up to the 31st of August 2020), you will get free entry to 90 museums, castles, and palaces, as well as free tickets for the public transport. For more information go to www.letni.olomouc.eu. 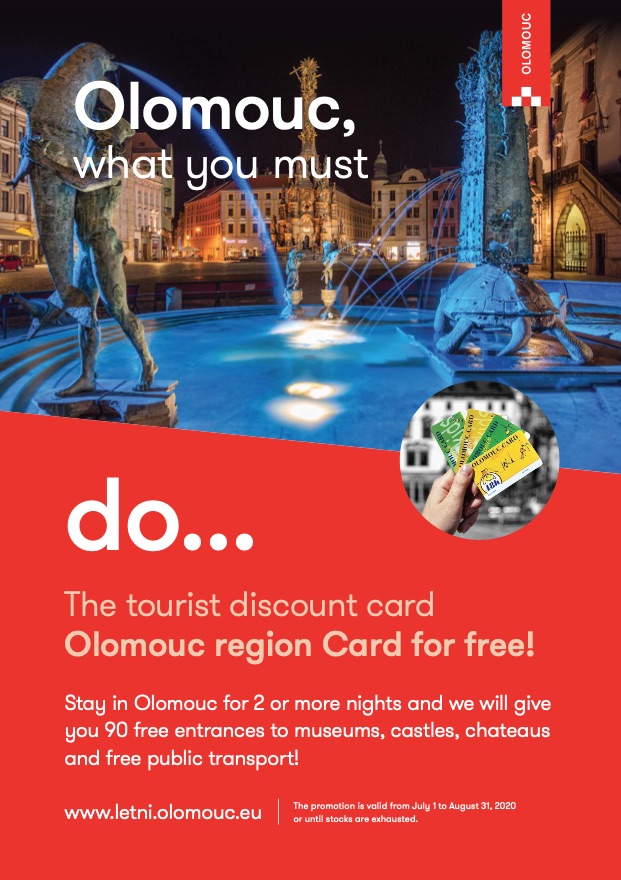 This Sushi Chef Incorporates Sneakers Into His Edible Creations And We Just Love It!